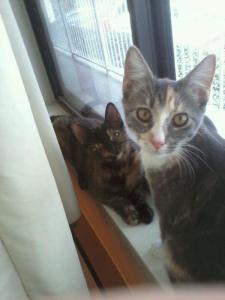 This too painful to even think of what to write. I started this post on March 29th, and haven’t been able to continue. Apologies if there are any typos, as I will not be reading back over this post (as I normally do) to correct them.

The last of my kittens, Oxanna Monroe and Phoenix Azalea (Oxy and Fi-Fi for short), were meant to follow me back to the UK. Because of new rules for pets to travel, I couldn’t take them with me when I initially left on March 12th 2013. At this time, *Steve still wanted to believe we were still together, which bought me time to try and raise funds for my beautiful girls.

Everything was going OK. His Basic Allowance for Housing (BAH) was coming through, as well as his unemployment money. He agreed to get the girls micro-chipped (he had previously spent the money for this a few months earlier), and to make sure their shots and paperwork were up to date, and he agreed that he would pay for their travel.  I wanted them so bad and boy, did he know it. I’d had them since they were around five to six weeks old. They helped me through my pregnancy. Oxy was a ‘tomboy’. Fi-Fi was a diva who loved to look at herself in the mirror. When Max was born, it was literally impossible to keep Oxy out of his crib. She’d creep in there and sleep at his feet. I guess she was protecting him.

I had already told him we were over, but Steve insisted we weren’t, and even went as fair as to post  how he missed his family on Facebook (as in Max and I). Whatever. As long as he was treating and feeding the girls well, I played along with it. It wasn’t long before I noticed that he was acting odd. My girls were starting to look scared, especially Fi-Fi, when I asked him to take pictures of them to send to me. He told me there was nothing wrong, but I knew in my heart there was.

He would tell me he didn’t want to part with them as it would mean he wouldn’t have any of his family around him.

Then he started to threaten me that he would “accidentally on purpose” misplace my cats. I was thrown into panic mode.

He sent me an email on May 28th that he had taken them to the pound via email.

He did the same again the next day May 29th. I asked him which pound, but he refused to tell me.

I called around. Nothing. By May 31st I reported them missing.

On July 10th 2013, with the help of Angels Among Us Pet Rescue (AAU) and other animal advocates, I managed to track down my girls at Cobb County Pound, Georgia. Fi-Fi had been euthanized on June 10th. She had been in the pound for 10 days. Oxy was euthanized ten days after her sister on June 20th. My precious girls were dead.

I can’t even begin to imagine how they felt in their last days separated from one another, in cages. They were so close.

Upon calling the pound, I asked the woman who answered the phone to explain what the hell had happened. She said Fi-Fi was scared and had become vicious so had to be put to sleep. As for Oxy, she had contracted Upper Respiratory Infection (URI). Bullshit. That’s a high kill pound, and if Steve had checked it out, he would have known that… or maybe the c**t did. (Sorry, I’m getting really angry again. I only use that word in extreme circumstances). It’s just what staff had decided to put on their records. I went on to ask who turned them in. She said the owner did. I asked her who the owner was. She couldn’t tell me, so I told her his full name. She said yes, it was him. “He wasn’t the owner” I told her. “He said he was“.  OK. There was one way to solve who the owner was. She had the micro-chips. I told her which site to go on.

She couldn’t stop apologising to me. I had indeed proved, that not only was I the owner, and my friends were listed as their next of kin with all her details available, but that they were also reported missing the same day he had taken them to the pound. Her voice became a whisper as I continued to demand an explanation.

Not one of the fuckers had scanned my girls to check whether or not they had micro-chips. Isn’t that the whole purpose of them?

I can’t go further. It hurts too much. But the post “Facebook Message” whereby I received a message from *Britney relates to this incident. I sent them both a private message saying that my cats had been euthanized, and that I hope they were please with themselves. At first Steve said he couldn’t afford them. Then he said that it was my own fault they had died. I told him that he was a lying murderer and that he should go fuck himself.

Here is a gallery of my girls, playing, sleeping and hugging each other. Just being their usual cute selves. 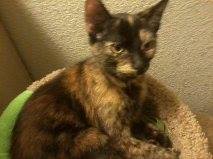 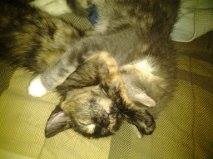 R.I.P. Oxanna and Phoenix. You must have been so confused. I’m so sorry I had to leave you with that monster. Mummy couldn’t do any better at the time. I thought you would be safe , but I was wrong. I am so sorry I let you down. But please know mummy never abandoned you. I fought for you both, but I ran out of time. A piece of me will be missing for the rest of my life. Not a day goes by when I don’t think of you. I found out you were separated from each other and I am so sorry for that too. I hope you found each other at Rainbow Bridge. We will meet again. I love you both with all my heart. Please forgive me. Lots of love always, Mummy. ❤ ❤ xx

(*Not their real names)

41 thoughts on “My Precious Girls, Oxanna And Phoenix”