Recently, I’ve been thinking about all the pain and suffering (my son and) I endured from my relationship with my abusive ex-husband.

The murders of my kittens/cats.

This weekend will be three years ago that I returned to the UK with my son, with his father’s permission. He had said he would follow, (I needed to get a job and somewhere for us to live), as he liked the idea of not paying for medical. He also said, it would mean he could get ‘lost’ in the UK, so he would not have to pay child support to his daughter in Montana. I hoped and prayed he would not follow, but deep down, knew he wouldn’t. Ultimately, it was down to him to decide for himself. Thank God, he didn’t. As well as the abuse, his mask had fallen off, and I had already called him out on a number of things.

On March 12th 2013, with our then twelve week old son, my abusive ex-husband drove us to the airport, with a one way ticket (upon his suggestion) to the UK. Apart from the birth of my son, during our entire relationship, this would be the best day ever. I landed in the UK the next day on March 13th, due to the time difference.

On May 26th 2013, I returned to the US for just shy of a week, without my son, as his father had left our bank accounts negative, and there was no money for food nor accommodation. I could not risk sleeping on the street with my baby, so followed my gut instincts and went alone. He had made sure his girlfriend had moved into the extended stay where we were living on May 25th – the day before my arrival. It was about a week prior to my return to try to collect as many of my belongings as possible, that a friend came through for me. I was able to have a roof over my head and was fed and watered for free. I boarded my flight on May 31st, and landed back in the UK on June 1st 2013.

Instead of leaving money in the bank accounts as we has agreed (my intention was to bring our son with me so his father could see him, which my ex-husband was fully aware of), he went on a spending spree with his girlfriend, leaving nothing for his children. He told me that I had a cheek for not letting him have a life, when all I did, was to ask him for some financial help with our son. He furthered his point, by telling me that he will no longer be taken advantage of.

Despite everything, I had still tried to make this individual a part of his son’s life, but he was not interested. This was even when I was undecided, as to whether or not I was doing the right thing. This individual is abusive, and shouted in his then ten week old son’s face, because our son probably had an upset tummy. The crying was keeping him awake you see, so a character like my ex-husband, would of course, blame anyone for his horrendous behaviour – except himself. Even a defenceless baby. However, if he had wanted to communicate with his son via Skype (for example), I would not have had a problem with that. In fact, I had tried this, but he was still not interested.

One cannot force another to do the right thing.

So, what did I do about the situation? I dragged myself up, dusted myself off as best as I could, and through tears, sweat, blood, pain, and with scars and bruises, I shifted from being an abused first time mother, to a mother and father standing firm for the sake of my son. My little boy has gone from strength to strength. He is a happy, but feisty character! Thriving in his pre-school, he is picking up Spanish well, but thinks he can ‘back chat’ me, thinking I will not understand. (Well played my Little Yum Yum, but rest assured, I am learning the language too!).

Although is is always nice for a child/children to have both parents, sometimes, one parent may not take an interest, or may not want to be a part of their life/lives. It is the other parent’s loss, not the child’s. Sometimes, it works in the child’s favour not being around the other parent, as he or she is abusive. Hopefully, this allows for the domestic abuse cycle to be broken.

I started this blog to embark on my healing journey. When I look back on some of the posts, I can see that I was a real amateur! Not that I am saying I am now a professional writer now, I am just trying to say at the time, I was not able to express myself properly nor in detail. I would ‘water down’ what I was writing about, because it was too painful at the time to relive. But I am sure, one can make out what I was trying to say at the time, when I was suffering immensely, trying to put what was in my head in text format.

Thank you all for following my blog and reading my posts – as random as they can be at times! Please allow me to apologise again, for not being able to keep up with your posts recently. I have had a lot on my mind, and have been trying to do too much at once. On the upside, I have finally gotten rid of the cold/acute sinusitis I had for little over eight weeks.

I hope all is well for you folks. 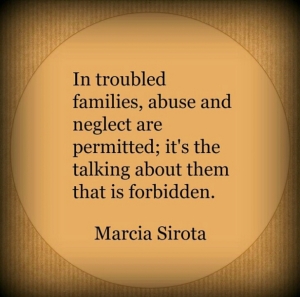 This is the sad truth.

But in my case, the abuser did not expect me to leave, nor to speak out.

I’ve said this time and time again, I was in an abusive relationship with my son’s father. Determined not to let my son grow up in this awful environment, I left his father when he was just twelve weeks old. No food. No money. No car. Just the clothes on our backs and a few other items.

I have no regrets. I am the one who bears the scars, inside and out. And as painful as they have been and some still are, I prefer to carry every drop of pain instead of my son. No child (or anyone else for that matter) should have to experience such trauma.

Now look at my little Munchkin. A feisty and happy little fellow.

I wouldn’t have it any other way.

I recently had comment made on one of my posts, from a fellow blogger Jocie Elizsabeth at Financial Abuse is Domestic Abuse. Thank you so much! I am so sorry you are going through what you have/are, but I really appreciate your comment. ❤

I must say, I am still surprised how many people say my blog has helped them in different ways. When I started, I had no idea this is where it would be today. Believe me, there have been times, when I have just wanted to curl up and hide. There have even been times I have wanted to shut my blog down and stop blogging altogether. Every time I feel like this, I get a message similar to that above.

Either way, I have finally realised something – one of the best things I have ever done in my life, was to tell my story. If voicing my pain can help others, I will not be silenced.

Biased preconceptions about men and women have impaired nearly everyone’s ability to identify wife abuse and consequently, our ability to hold abusers responsible for their violence. Even our questions betray a preoccupation with the victim’s choices and responsibilities rather than those of the perpetrator. We ask, “Why does she put up with it ?” rather than “Why does he beat her?” ~ Diary of a Mad White Woman

Diary of a mad white woman

YES-YES-JUST YES. You can find this article at New Hampshire Bar Association online.

Identifying the Assaultive Husband in Court: You Be the Judge

Reprinted with permission of The Boston Bar Journal, a publication of the Bar Association. David Adams is Co-founder and President of Emerge: A Men’s Counseling Service on Domestic Violence. He is a nationally known expert on counseling assaultive husbands.

Individual and institutional suppression of the truth frequently run parallel courses in history. Even when the truth is not actively suppressed, it is sometimes resisted because of the low status of its tellers. Such is the case with wife abuse. The ability of individual perpetrators to conceal or justify their violence has been facilitated by a criminal justice system that has historically ignored or blamed the battered woman (Taub & Schneider, 1982: New York Task Force on Women in the Courts, 1986). But the…

Financial Abuse is very much a part of Domestic Abuse/Violence. Believe me, I know because I experienced it myself at the hands of my (ex) husband *Steve. It is definitely a form of abuse that isn’t talked about much. But we must remember, not all abuse is physical.

If a victim is financially dependent on their abuser — for income, for a roof over their head, even for health insurance — walking away is made all the more difficult. They often must struggle to become financially self-sufficient, putting them at greater risk of falling into poverty and homelessness.